The first written evidence of the existence of vineyards in Quel dates back to some documents on the arbitration of a dispute back in 1327 between the Council of Quel and the Chapter House of the Cathedral of Calahorra in relation to the construction of «a dam to supply the mills and irrigate the vineyards and other landed property in the district of Santamaría de la Cueva, adjacent to Autol», as Santiago Ibáñez Rodríguez includes in his article: ‘El tiempo que vio nacer al Rioja: historia de un vino y una región hasta 1899’, (The time that saw the birth of Rioja: the history of a wine and a region up to 1899) published in the collective work “La Rioja, sus viñas y su vino·” (Rioja its vineyards and its wine). (Government of La Rioja 2009)

Francisco Javier Goicolea reports in the second chapter of the book ‘Quel histórico’ (Historical Quel), directed by José Luis Gómez Urdáñez, the ruling on another lawsuit in 1490. In this case the lord and the council of Quel opposed a resident of the municipality of Grávalos over the possession and use of certain municipal districts located in Quel and in its village of Ordoyo. The ruling, dated 14th August 1490, pronounced that the inhabitants of Grávalos could enter the municipal areas under dispute in order to graze their cattle, yet without damaging the land dedicated to grain crops and vineyards, and with no right to cut wood or knock down acorns with a stick in the hills in the municipal district of Ordoyo. They would also have to pay a fine of 10,000 maravedíes (old Spanish coin) to lord García Sánchez de Alfaro, for the damage caused and a further 4,000 maravedíes for the damage caused by demolishing one of his houses (ARCHV, RRE, 30-29).

Thanks to the early 16th century municipal documentation of Arnedo, it is possible to establish that Grávalos was one of the villages pertaining to the alfoz of this chartered town, together with El Villar, Tudelilla, Villarroya, Bergasa, Carbonera and Turruncún. The “alfoz” was the name used in the Iberian peninsula (Castilla, León and Portugal) during the Middle Ages to specify the geographical rural district that came under the council of a chartered town.

Expansion of vineyards in Quel
in the Middle Ages

To continue with the account by Francisco Javier Goicolea, the end of the Middle Ages was marked by a certain expansion of the vineyards in Quel, as observed by the fact that wine accounted for the second best valuation in maravedíes in the tithes collected by the Church, «which, together with other figures, appears to confirm that vineyard cultivation experienced a certain expansion in the farmland of Quel.
In fact, it is important to recall the interest of the inhabitants of Quel in planting vineyards at that time. This had led to a licence granted (and later revoked) by García Sánchez de Alfaro II to allow each inhabitant to plant ten peonadas of vines on non-irrigated land (a peonada is the amount of land that a farm labourer could work in one day). And these same lords of Quel took a great interest in this crop: they were the owners of the vineyards within the jurisdiction of the chartered town, they barrelled the wine in the the barrels held in their “palaces” of Quel, and their vassals were required to pay them winegrowing rights (revenue from the grapes, harvesters and wine).
In all likelihood, the markets of the thriving urban centres in the surrounding area, such as Arnedo or Calahorra, served to boost the cultivation of this food product that was increasingly demanded by urban populations».

In the late 15th century, vine cultivation already had some importance to the economy of Quel, as shown by the fact that the first documentary references to the existence of wineries started to appear. An inventory conducted on the properties of lord García Sánchez detailed that his house “palace” of Quel -«where he lived»- had a winery in which there were two barrels of three hundred pitchers of wine each, four barrels of two hundred and fifty pitchers, two smaller barrels of fifteen pitchers and a variety of instruments relating to the production of wine, such as a press, as indicated by Francisco Javier Goicolea in his aforementioned work. This book serves as a crucial reference to show that winegrowing was well-established in this area of La Rioja, as well as winemaking and wine culture.

The early Modern Age was marked by the expansion of vine cultivation in La Rioja. In the first decades of the 16th century, vineyards spread throughout La Rioja, with two areas of particular note: the first is from Haro up to Logroño, following the course of the river Ebro and from Nájera to Laguardia from south to north; the second is an area delimited by four points: Alfaro, Ausejo, Arnedo and Calahorra, with the chartered town of Quel located in the very heart of the area covered by vineyards as a result of this expansion.

Splendour
of the 18th century

The Cadastre of the Marqués de la Ensenada, whose name was Zenón de Somodevilla y Bengoechea, an eminent Riojan, born in Hervías on 20th April 1702, reported on the growth of Quel in the 18th century: “The municipality of these chartered towns of Quel de Yuso and Quel de Suso covered, from east to west, seventeen thousand two hundred and fifty-five yardsticks and, from north to south, three thousand nine hundred and fifty-five yardsticks. And with a circumference of thirty-three thousand one hundred and forty-four yardsticks which makes six and a half leagues and twenty-four yardsticks, calculated at five thousand yardsticks per league and league per hour”.

In the 18th century, as reported by the work “Quel Histórico” (Historical Quel), the expansion of one specific crop changed the appearance of the non-irrigated land in Quel: the vine. With 542 hectares in production and a further 28 “planted” with “first and second leaves”, Quel was one of the major producers in La Rioja Baja, despite the fact that it was close to Arnedo, the largest wine producer in La Rioja Baja at that time. However, Quel was also geographically close to the episcopal city of Calahorra, which had but few vineyards and, for this reason, it was the city’s main supplier of wine. As a result, almost every inhabitant had vines and a winery as well. For the 338 inhabitants of Quel recorded in the census (including 59 widows and 3 spinsters, who were counted as half an inhabitant) there were no less than 224 wineries in Quel. These wineries were located “in three districts called Las Coronas” and they already had their present-day appearance, with their upper loading system in order to adapt to the hill. Many of the unusual wineries of today are unquestionably from this period of splendour of wine in Quel. So much so that the cadastre surveyors calculated that the wine contained in the barrels in the wineries could reach 50,000 pitchers.

In 1851, as reported in the work ‘Los Barrios de Bodegas : Quel, un ejemplo singular’ (the winery districts: Quel a unique example), in the cadastre conducted by Madoz, the number of wineries in Quel had significantly increased in relation to the 224 indicated by the Marqués de la Ensenada: «Opposite the town, on the other side of the river Cidacos and at a distance of some 700 yardsticks, lies a gentle hillock that runs from Arnedillo to Autol in which more than 350 caves or cellars have been excavated to store wine». The authors of the work maintain that the number of wineries indicated by Madoz «appears to be exaggerated» and present another source «consulted in the Historical Archive of La Rioja» which offers the far from negligible figure of 240 caves in 1860 which «formed three groups, with the first at a distance of 516 metres from the head of the district, and the last at a distance of 1,388 metres» .

In 1881, in Quel there were 563 hectares under vine, accounting for 25.95 percent of the farmland in the entire municipality and, as indicated by the authors of ‘Los Barrios de Bodegas: Quel, un ejemplo singular’, it is clear from the Nomenclator of 1893 that there were 320 caves, huts and shacks, a figure that would reach 537 in the Nomenclator of 1900. In the work, the authors highlight the fact that the cadastres were a key source of information in the 20th century and, in 1929, after consulting the Tax Register or Buildings and Building Land, they found that there were three winery districts in Quel: the first with 136 plots, the second with 52 and the third with 27. A total of 215 wineries were identified with their owners, boundaries, size, type of building, materials and descriptive sketch. In 1964, there were 242 wineries identified, located in three districts called Las Coronas, La Coronilla and La Cilla. The first two were located on the right bank of the river Cidacos while the third one was to be found in the “Calle de las bodegas” (street of the wineries) in the town centre. Las Coronas was built on the slope closest to the bridge and held the greatest number of caves. La Coronilla was located a few metres upstream along the Cidacos river and only housed some 15 wineries. This Cadastre also precisely shows the proprietors of each cave.

In 1947, as was the case in many winemaking localities in La Rioja, the cooperative winery was established in Quel , marking the start of a phenomenon whose effects still continue right up to today: the abandonment of the wineries, since the winemakers no longer made wine in their caves but at the facilities of the cooperative.

As highlighted in the book ‘Los Barrios de Bodegas: Quel, un ejemplo singular’, in the last 250 years, the surface area under vine in Quel has varied in line with the periods of market growth and decline, with a figure of 550 as a reference that is maintained since the times of the Marqués de la Ensenada. 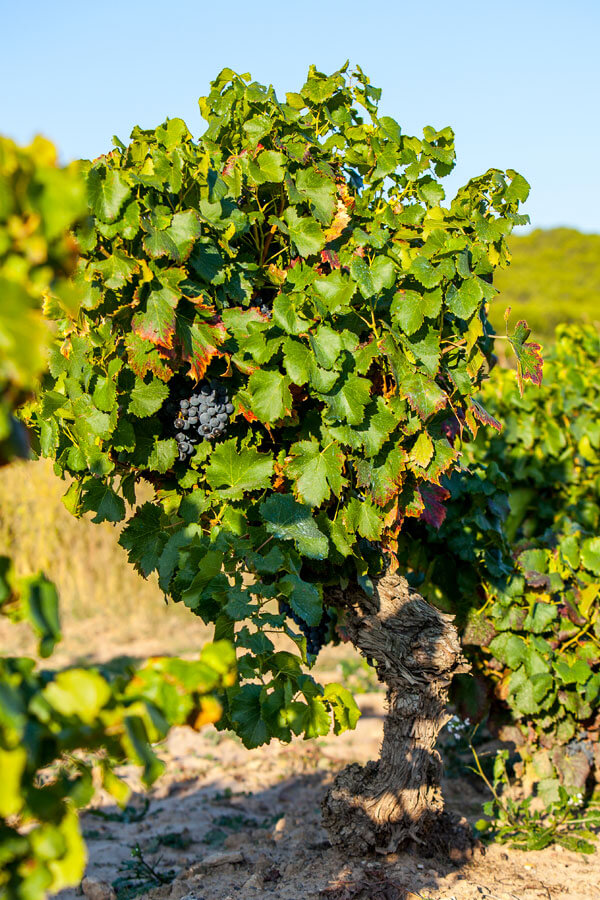 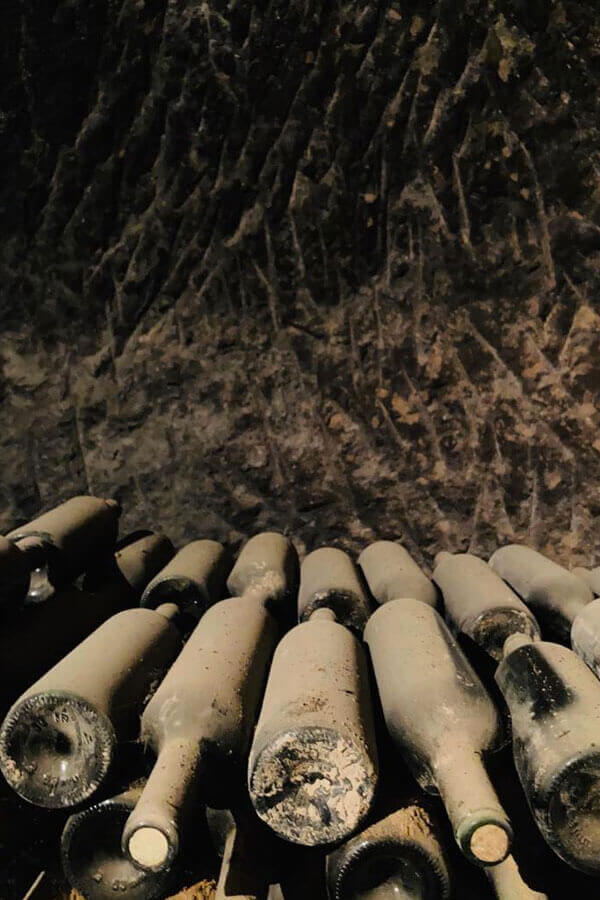