Queirón represents and adopts the philosophy of a family that has been committed to the world of wine for the last four generations. It is the fulfilment of the dream of Gabriel Pérez, vine grower and winery owner in Quel, and a pioneer in this area of La Rioja. It took him more than a decade to silently work on this new winery in order to recover traditional vineyards and sites around Quel and the foothills that climb up towards the Sierra de Yerga. This is a land whose winegrowing tradition dates back to the Middle Ages, as evidenced by a number of documents found in the Chapter House of the Cathedral of Calahorra, dating back to 1327.
Queirón represents one of the most long-standing symbioses of the association of a family with winegrowing in La Rioja. Originating from Quel, the Pérez Cuevas family has always been known in the area as “los majos” or friendly ones. In actual fact, some vestiges of this moniker still remain in the area, such as the so-called path of “los majos”. Lázaro Pérez, the great-great grandfather of the current generation, used to grow Garnacha while his daughter was responsible for selling it. The family eventually acquired a small bar – grocery store in Quel, called “Choco” where they sold to the public the wine that they themselves made in their primitive family winery located in the heart of the old quarter of this town in Rioja Baja, right next to a small distillery, another of the historical traditions of this town.

In 1980, Gabriel Pérez (Quel, 1947), on completion of his studies in Bilbao, took the decision to dedicate himself exclusively to the world of wine. He harvested his first grapes the following year, from the 15 hectares of family land they owned in Quel. The remaining grapes were purchased from growers in the town and production did not exceed 60,000 litres. The wine was made in a small warehouse and, except for the wine set aside for family consumption, the rest was sold to wineries in other areas of Rioja. When Gabriel Pérez founded Ontañón in 1985, there were just four wineries selling wine in the whole of Rioja Oriental. 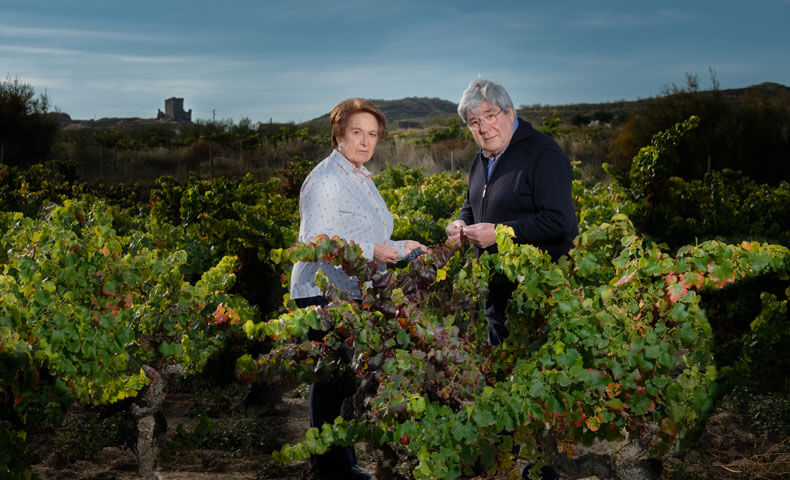 One of the keys to the establishment of Ontañón was the acquisition of vineyards. The fact is that, at the time, no one invested in land, witnessing an alarming depopulation of rural areas. Gabriel was convinced of the need to recover vineyards, native Rioja varieties and that the entire project should revolve around the commitment of his family and the search for excellence.

In 2010 Gabriel Pérez took the first step towards the creation of Queirón, a winery in Quel, marking a return to his origins in all senses: vineyard, winery and wine. «It’s my dream», he confesses. «The idea of Queirón gradually took shape in my mind around 2010. I had been in many wineries, I’ve built a few and I had a site in Quel that met all my requirements. My memories, my family roots, surrounded by our vineyards, in the Barrio de Bodegas de Quel winery district and in a place that was the former distillery. I knew that the work would be complex and hard, due to the conditions of the land, but it was clear to me that it was going to be a winery that observed the gravity winemaking philosophy of the former public wineries in the district».

Gabriel’s children are now running the winery: Raquel, Leticia, Rubén and María or, what is the same, vine grower, oenologist, sales, human resources. The soul and advancement of one of the remotest areas of Rioja, Rioja Oriental, Sierra de Yerga, native varieties, maximum and radical balance with nature and the quest for the subtle expression of each of its parcels.

“The vineyard
is our
raison d’être”