A vineyard
between three centuries

The El Arca vineyard is located to the north of the stone castle of Quel dating back to the 15th century. It is named after a unique neighboring building from the 19th century, whose function was to divert water into three distinct trenches: one destined for Arnedo, another for Autol and a third branch destined for Quel. The vineyard lives in what we call a water paradox, where it senses a constant flow of the liquid element, and yet suffers to benefit from this abundance.
EL Arca covers an area of 0.89 hectares and is a true relic of century-old Garnacha vines, dating back to 1892. Its longevity demonstrates the amazing adaptation of the Garnacha grape to this particular area of Rioja as well as its identity as a variety in possessing terroir. Approximately 2,000 vines coexist within an area of 7,000 square meters, where in addition to Garnacha, a smattering of white varie ties also appear, as a demonstration of the traditional viticulture that was carried out in this area of Rioja since time immemorial. Much of the wine is made directly in the vineyard. The first batch arrives at the
winery as berries that themselves express the particular personality of a vineyard as unique as it is fragile.

The soil of El Arca is comprised of its own amazing ecosystem; an amalgam of sand with silt and diverse layers of clay, tiny but perceptible, they give the impression of an extremely poor soil, which is essential in producing wines with great potential.
The orientation of El Arca also plays a decisive role, both for its survival over time as well as for achieving the most fragile balance between production and excellence, given it stares directly into the cold “Cierzo” winds and protects itself from the torrid heat of the summer. The choice of this site by the winegrowers, who planted it at the end of the 19th century, once again highlights the value of knowledge of the terroir of those forefathers of Rioja viticulture. Each vine is a true wonder, that resembles a sculpture of twisted and wiry arms that have made their enduring impressions in the ancient wood, displaying the depth of each year, of each vintage and of the succession of seasons that have sculpted over time the personality of each vine.

Barely a hectare in size, the El Arca terroir is composed of 100+ year old Garnacha vines alongside a 19th watershed composed of three drainage canals that provide water to the neighboring villages of: Arnedo, Autol and Quel. These vines have deep ancestral roots as well as twisted arms almost like caricatures molded by generations of winegrowers.

Rioja, Rioja Oriental and the Cidacos river valley represent a few sites of the most ancient, yet little known Riojan wine traditions. The first document that testifies to the origin of viticulture in Quel dates from 1327 and its primitive “wine cellar district” with caves carved out of the cliff face, otherwise known as the “Barrio de Bodegas”, one of the most unique and historical locations in the world for winemaking.

As wine growers, the Pérez Cuevas family represents a link with Rioja viticulture that spans four generations and exemplifies the ultimate expression of love for its native environment and the recovery of its wine heritage.

Vintage 2018
A vintage characterised by being one of the longest harvests the history of Rioja wine. The abundant rainfall recorded during the winter and spring of the 2018 campaign enabled the wines to achieve an excellent condition during the first months of the growing cycle. In the second half of the month of July the rains ceased and we began to enjoy hot, dry weather. The harvest was marked by the level of selection of the grapes both in the vineyard and on reception in the winery, and with no upsets insofar as the weather was concerned. 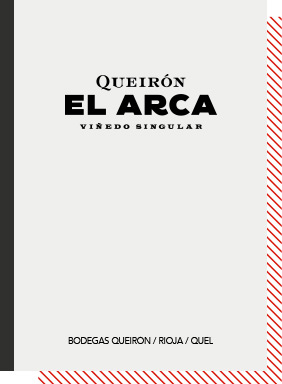 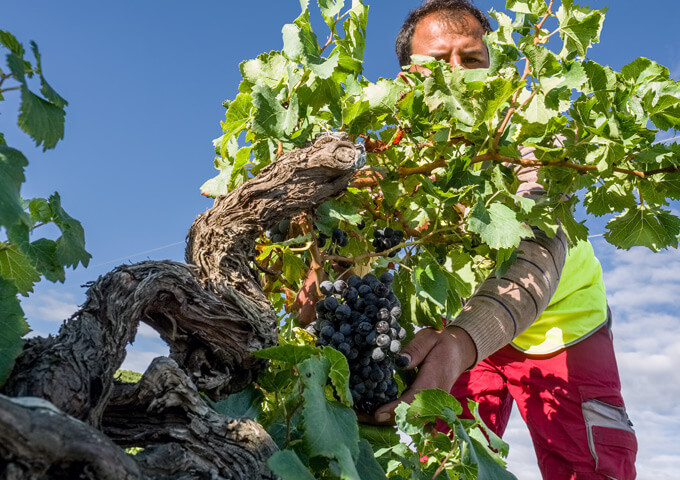 The harvest is done by hand to lovingly protect each bunch from anything that may affect its quality and in order to select only the best of the best, depending on the TPI (Total Polyphenol Index) phenolic ripeness level of the grape. It begins at daybreak to take advantage of the cool night time temperatures, with the bunches being placed in 15-kilo boxes which are taken immediately to the winery in order to preserve each and every one of its exceptional qualities. Production is very limited, less than 2,000 kilos; that is to say, it does not even reach a kilo of grapes per vine. Each bottle of Queirón El Arca represents one single vine from this vineyard. 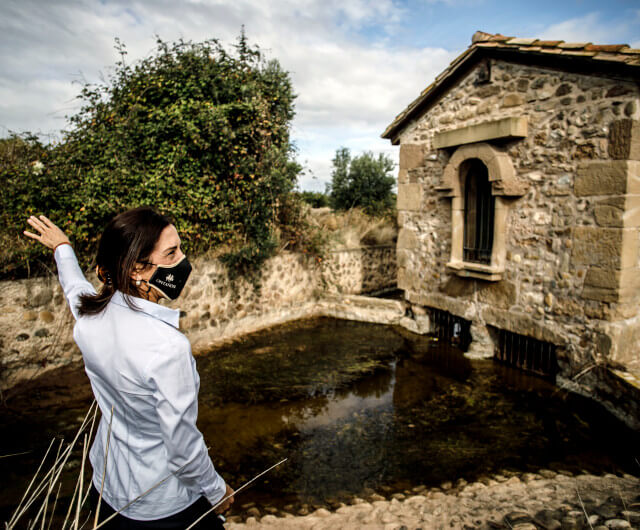 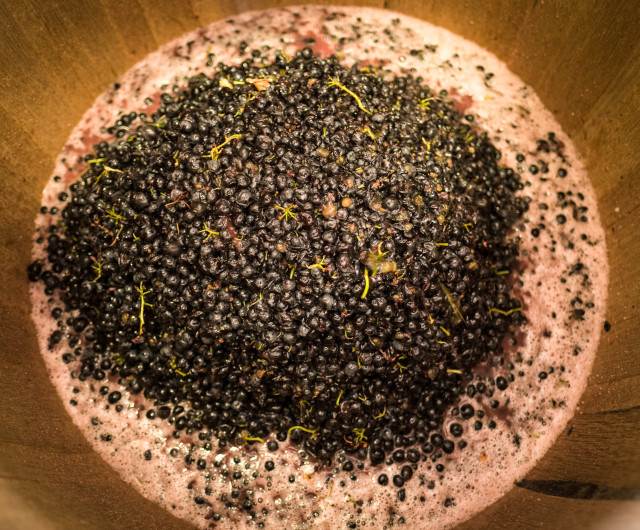 After spending a night in the cellar at 12oC, the first task in the winery is the selection of each bunch on the triage table. The team selects only those berries that have optimum maturity and perfect health for the next stage of the process. After this, the de-stemming is carried out. This is the gentle separation of the grapes from each bunch.
The grapes are placed in American oak barrels and a gentle step is performed to release must from some of the grapes, but not all. The idea is to achieve a semicarbonic maceration (but without the presence of the stems that might produce herbaceous compounds). With this operation, some of the beneficial aspects of
carbonic maceration are achieved, enhancing the aromatic intensity and the maximum expression of the fruit; in addition to those derived from traditional production, in which the crushing process releases certain amounts of must, bringing it into contact with the skins and increasing the release of tannins and anthocyanins, which are essential compounds in the quality of the wine.
With the grapes in the already closed barrels, the fermentation begins with spontaneous yeasts from the vineyard itself in order to obtain the most natural expression of El Arca. The purpose is to obtain the most accurate snapshot of its complexity and the genuine characteristics of the personal imprint of such a special vineyard.

With the fermentation of the grapes in the barrels themselves, the extraction of tannins is accelerated, which favors the stabilization of the colour, in addition to promoting an increase in volume and aromatic complexity. After this first fermentation (which lasts for ten or twelve days), the wine is bled (it is freed from the remains of the seeds and the skins) and it is re-introduced into one year old French oak barrels with different levels of toast. When the fermentation is finished, it is racked again and a homogenization of all of the wine is carried out before it is re-introduced to French oak barrels where malolactic fermentation occurs, once again with the presence of indigenous yeast native to the vineyard. These indigenous yeasts enhances both the identity of the wine as well as its aromatic complexity, elegance and volume. In this aging phase it rests another five to seven months on its own lees. Afterwards the wine is placed in concrete egg-shaped tanks. The use of these vessels enhances micro-oxyge- nation due to the porosity of the material with which it is built (limestone and clay) and, in addition, its shape produces a smooth internal vortex current that favors very soft aging on already fine lees, which ultimately leads to added complexity, finesse and volume of the wine.
Finally, after spending twenty months in this maturation process, the wine is bottled and laid to rest in the winery cellar until it reaches its determined optimum moment of enjoyment.

Queirón El Arca is a wine that is included in the new category of the DOCa Rioja Regulatory Council, otherwise known as: ‘Single vineyard’, which consists of a stratification of the most unique parcels of the Denomination and which have previously been recognized by the Ministry of Agriculture and certified as singular examples, meeting a series of demanding parameters. The singular vineyard can be comprised of one or more officially registered parcels. The minimum age of the vineyard must be at least 35 years.
The wine from a ‘Viñedo Singular’ is required to pass two separate tests: the first after the first fermentation for qualification and the second before the market launch. The aforementioned, must be determined ‘excellent’ in the organoleptic analysis, which is carried out in accordance with the Technical Instruction of Verification of the Single Vineyard and that is equal to a minimum of 93 points on the OIV tasting sheet used by the Council. This tasting committee has been specially formed by six technicians who work in different DOCa wineries. Vineyard requirements include vineyard yields of 20% lower than usual (maximum of 5,000 kg / ha in reds and 6,922 in whites) and 65% in grape transformation compared to a 70% standard.

Head Sommelier of Jaleo Restaurants in the USA

A new light shines in the historic district of Queirón, showcasing the centenarian high-powered Garnacha of “El Arca”. It opens with aromas of red cherry and strawberry, surrounded by dried Mediterranean herbs, dried rose petals and a light touch of bitter orange peel. The flavors are all enveloping on the palate, with silky and delicate flavors that lead to an unforgettable finish. This is territory and tradition in the glass, signaling a long life and a promising future.

The allegory of Quel